Tonight is the premiere of The Cape, an NBC show about a disgraced cop who takes on the persona of his son's favorite superhero. I'd be watching if I weren't at work. As it is, I'll catch it On Demand later. 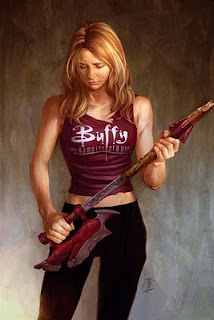 new show makes me think about my own on-and-mostly-off love affair with comic books. As a kid, my dad let me pick out a comic book every Saturday on our weekly trip to the grocery store. I read Spider-Man, Superman, Batman. My favorite, though, was Wonder Woman. I wanted to be Wonder Woman, with the lasso and bullet-proof bracelets and invisible plane. Little girls nowadays pretend to be Disney princesses; I pretended to be an Amazon princess.

Eventually, the weekly comic books stopped. My collection vanished. (I suspect it went the way of most childhood comic book collections, which is tossed by a parent.) I became interested in fantasy and science fiction novels and drifted away from comics. The person who re-sparked my interest: Joss Whedon.

It was a sad day for me when Buffy the Vampire Slayer aired its last episode. A few years later, when creator Joss Whedon started up "Season 8" in comic book form, I jumped right on board. That eventually also led to my interest in comics based on Angel, Firefly and Torchwood, and Whedon's earlier Fray series, but mostly I stick with my monthly Buffy fix.

After two or three years and about 40 issues, Season 8 is coming to an end. The final issue will hit stands this week. I can't say I always understood what was going on, especially toward the end (something involving an evil universe that possessed Angel and a magic seed), but it has been a hell of a ride.

I hear that Season 9 is already in the works. Thank goodness. Because I would miss my monthly trip to the local comic-book shop -- the one with the 10-foot-tall Hulk statue -- in which I walk back out with a great new adventure in my eager hands. For a little while, it makes me feel like a kid again.
Posted by Jennifer Campbell-Hicks at 4:23 PM