I'm sure you're all familiar with this little diagram: 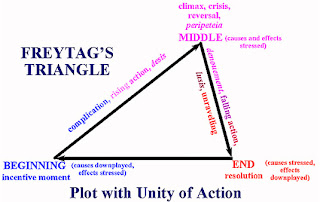 This is a basic narrative structure. It is also something Aaron Sorkin, who wrote the script for "The Social Network," apparently forgot to use. "Social" is an excellent movie with snappy dialogue that deserves its Oscar nomination accolades, but it doesn't deserve to win best picture. Why? There's no climax. But, you say, every third-grader knows your story needs a climax! Too bad "Social" wasn't written by third-graders.

OK, I'm being harsh. Sorkin is a great writer. Usually. I was absolutely engrossed in this movie right up until the last 10 minutes, and I must concede that the movie is boxed in by its source material (it was based on a novel which was based on actual events). Too bad real life does not always structure itself in a way that lends itself to the big screen.

The plot revolves around the conflict and tension among Mark Zuckerberg and Eduardo Saverin, co-founders of Facebook, and Napster founder Sean Parker. IMO, the narrative should have built to an epic confrontation among those three men. Instead, the final key scene involves Parker's arrest when he is caught with drugs and an underage girl. Huh? OK, sure, that probably did happen. It would have made sense as the climax of a story about Parker's playboy lifestyle, but this story is about Zuckerberg, not Parker. So on that underwhelming note, the movie heads into its last scene (which is cute) without the benefit of a climax, the credits begin, and I am left wondering whether the rest of the movie accidentally ended up on the cutting-room floor.

I've now watched six of the 10 Best Picture nominees, and I still think "The King's Speech" will take the prize come Oscar Night.
Posted by Jennifer Campbell-Hicks at 9:14 AM