Doctor Who: The Impossible Astronaut 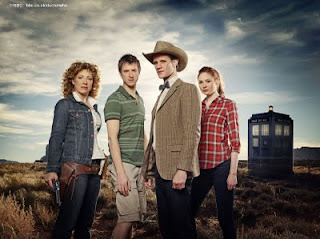 Brilliant. Fantastic. I laughed and cried (and sometimes groaned at the sheer volume of dialogue recycled from earlier episodes). I also spent most of the episode thinking, "Steven Moffat what are you doing?" The season 6 premiere of Doctor Who left us with enough questions, complications and conspiracies to make me start looking for a tropical island and a spinal surgeon with delusions of grandeur ("We have to go back!").

If you're looking for a recap or more in-depth review, go elsewhere. There are plenty of those on the web today. I will spent the remainder of this post addressing the main questions I was left with when the end credits rolled. WARNING: Huge spoilers ahead. If you haven't watched "The Impossible Astronaut" and plan to do so, do not read any further. You will be sorry.

OK. Let's get with the speculating.

1. Who killed the Doctor?
A person in an Apollo spacesuit walked out of a Utah lake, exchanged a few words with the Doctor and shot him with a laser. When the Doctor started to regenerate, the person shot him again, effectively killing him for good.

2. Why was the Doctor killed?
I have no clue. But here is what I hope the reason is not: An attempt to avoid a paradox. Amy, Rory and River watched the Doctor die, which means the future Doctor is obligated to go to his death to close the time loop and, by extension, avoid the destruction of the universe. There's no emotional resonance in that. It would be a cop out.

4. What's up with the Silence? (Or is that Silents?)
Here's what we know. They look like a cross between Munch's "The Scream" and the Gentlemen from the Buffy episode "Hush." They blew up the TARDIS last season. You forget about them completely when you're not looking at them (Don't blink! ... Oh, wait, wrong monster). They kill people with lightning blasts (which I didn't like ... I thought the writers could have come up with something more unusual). They know things they shouldn't know (Amy is pregnant, the Doctor dies). They have an unhealthy interest in the Doctor. What we don't know: Why are they intent on messing with the Doctor? What do they want? I guess we'll have to wait and see.
Posted by Jennifer Campbell-Hicks at 4:14 PM