Doctor Who: The Almost People 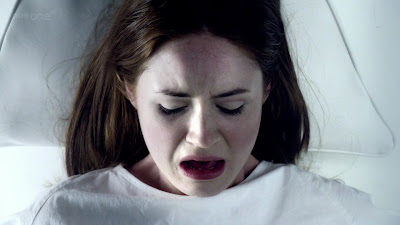 Part two of the two-parter that started here. Humans and gangers run and fight and run some more. The Doctor has some amusing interactions with his ganger clone. One of each pair of humans and gangers gets off the island.

But is anyone really talking about the first 40 minutes of this episode? No! Because the last five minutes were chock full of answers (and more questions): Amy goes into labor; Amy isn't the real Amy but is a ganger; the Doctor dissolves ganger Amy, thus sending her consciousness back to her true body, which is being held captive and about to have a baby.

That is what we know. There's a lot more we don't. I am avoiding spoilers like the plague. So I'm going to spend the rest of this post speculating on what we Americans are still oblivious to but most Whovians already know because they are a week ahead of us and got to watch "A Good Man Goes to War" last night. I hate being the last to know.

Who kidnapped Amy and why?
One of the abductors is the eye-patch lady (her name is Madame Kovarian) who has been appearing to Amy in doors and walls all season. Real Amy in her ganger-harness cell has been seeing eye-patch lady watching her through a sliding window in the cell door. Who else is involved in the abduction, we don't know yet. And why? Well, it has to be the baby. Is it, as Amy speculated earlier this season, a "time baby" affected by her travel in the TARDIS? Or is it the Doctor's child? (Although I don't think for a minute that Amy would cheat on Rory, despite her flirtations with the Doctor.)

When was Amy kidnapped?
My first thought on this was it happened in "Day of the Moon" when the Silence grabbed her. But she saw Madame Kovarian before that happened, so no. Earlier than that. I'm guessing she was abducted sometime between the honeymoon and the season opener. Ganger Amy has been around for a while now, which explains the Schrodinger's pregnancy. Amy is pregnant, but the ganger is not; thus, the TARDIS got confused.

Who is River Song?
In the teaser for A Good Man Goes to War, River says, "This is the day he finds out who I am." And this is point where all of you who have seen that episode or have read the spoilers can start snickering at my ignorance. Go ahead. But let's put two and two together, shall we? Amy is about to give birth. The identity of River is about to be revealed. Those two plot points have to be connected. River is Amy's daughter. If I'm wrong, I will be very, very surprised. This also discounts my previous speculation that the Doctor is the father because that would be incestuous and gross.

One last plea: If you've seen the mid-season finale, please do not post spoilers in the comments section because I don't want to know. Thank you.

Posted by Jennifer Campbell-Hicks at 4:10 PM