Doctor Who: A Good Man Goes to War 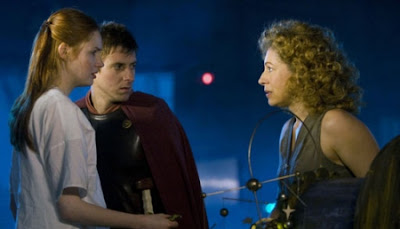 Here we are at the mid-season finale of Doctor Who. Let’s get the River Song stuff out of the way first, shall we? Some people said she was Amy and Rory’s daughter, others that she was the regenerating girl and others that she’s the Doctor’s wife or lover. Guess what, folks. We’re all right! Cookies for everyone! (By the way, I’m proud to say I had it figured out when we learned Amy had named her daughter Melody.) About the only thing not confirmed is whether River killed the Doctor. Frankly, I’m starting to doubt she did. “The best man she’s ever known” could quite easily be her father, Rory.

Now, moving on with the episode itself. It’s fast-paced and energetic and, I’m sorry to say, does not live up to its own hype. This is a Stephen Moffat script, and it shows. He’s famous for throwing about a hundred ideas against the wall to see what sticks. This time it results in some loose ends (i.e. the fat thin gay married Anglican soldiers, Lorna Bucket) and a lot of broken promises. Here’s what I got out of it: Just because a character says something doesn’t make it true.

In other words, the buildup was huge and the payoff too small.

Now, to the revelation of River. In the season 5 finale, when River tells the Doctor he will soon learn who she is, she gets an anguished look on her face and starts spouting apologies. At the beginning of this episode, when she tells Rory that today is when the Doctor learns her identity, she again delivers the news with heavy sadness, leading us viewers to believe that the revelation will come across as a betrayal and a heartbreak that will take time and effort to heal. So, what’s the Doctor’s response to learning the truth? He grins like an idiot. What was River so upset about? Either we viewers have been seriously misled or the Bad Thing that makes River sad has not happened yet.

One last irritation, and then I will let this episode rest: Amy Pond. Why is it in so many television shows that when a woman has a baby, she immediately becomes a passive damsel in distress? This is Amy Pond here, the girl who thinks “Don’t Enter” signs are an invitation and who walks blind through a forest full of Weeping Angels. Becoming a mother does not change who you are. I would have expected that when a bunch of baddies take her baby and lock her in a room that the lioness would come out. She would do everything in her power to escape and find her child. Instead, she gives speeches about how her men are going to save her and make everything all better. Yes, it’s cool to see Rory man up, but it should not be at the expense of Amy.

I’ll do a midseason wrap-up sometime this week, then it’s onward with Torchwood for the summer.
Posted by Jennifer Campbell-Hicks at 2:28 PM