November has been an unproductive month for me in writing. I took my Writers of the Future rejection really hard - harder than any rejection I've ever received - and it stole all the wind from my sails. As a result, I've managed to almost finish one short story this month. It's been a slog, not because of the story itself (which I think will turn out quite good) but because writing itself has lately become a chore rather than a fun activity.

Last night, I figured out how the work-in-progress needs to end, which will require tweaking a couple of scenes I've already written. I meant to do the tweaking this afternoon. Instead, I spent most of the day on the living room couch with my sick daughter curled up on my lap. Maybe I'll carve out some time for writing tonight after work.
Posted by Jennifer Campbell-Hicks at 3:03 PM 4 comments:

This year, WalMart started its door-buster sales at 10 p.m. instead of midnight. I had a short list of items to procure, starting with a couple of video games for my kids. The line for the video games was already a hundred people long by the time I found it, and it added another hundred or two people after me. And the store had 12 of each video game title. Twelve. Every few minutes, an employee would come down the line telling us which games they had just run out of, to a chorus of groans and curses. But thankfully, my two target games were still in stock when my turn came.

After that was DVDs and Blu-Rays, clothes and toys. The movies and television shows were well-picked-over by the time I got to them. I saw plenty of customers carrying off 10 to 20 discs apiece. One woman literally filled her cart to the brim with Blu-Rays. I bought three. Two as presents, and True Blood season 2 for me.

I found everything on my list except sheets, which were long gone by the time I figured out where they were. I spent $75 on a pile of merchandise that normally would cost three times that much. And I was home by 11 p.m., at which time I tag-teamed my husband, who headed out to Target. All in all, a very successful trip.
Posted by Jennifer Campbell-Hicks at 12:33 PM No comments:

Happy Thanksgiving, everyone. I am spending this warm, sunny holiday in the newsroom. Yep, I'm working. And I'm thankful for it. There was a possibility that I would not have a job this holiday season if my employer did not get a satisfactory number of buyout takers and commenced with the firings. But -- in not so shocking news -- a lot of my newspaper colleagues are taking the chance to jump ship and get paid well for doing so. Still, I am sad that we are losing such excellent journalists.

After work, I plan to hit the midnight Black Friday sales. If this is my last blog post, that means I didn't make it out alive. Ha.

My husband and I took our kids to see "The Muppets" yesterday, and a fun time was had by all. It's not a fantastic movie, and not as good as the original Muppets movie, but it had enough celebrity cameos and silliness to keep adults and children entertained, and that's saying something.

We had some sad news in the book world this week, and it would have been hard to miss with all the coverage and remembrances I've seen. Anne McCaffrey died. I read "Dragonflight" when I was 9 or 10, and it was my first exposure to adult fantasy. Since then, I've read most of the Pern books and a smattering from her other series. What an amazing writer. She also paid it forward by serving as a judge for the Writers of the Future contest. She will be missed.
Posted by Jennifer Campbell-Hicks at 12:55 PM No comments:

I'm way past due on catching up on recent television and movie news. So here goes:

You can now watch the trailer for the Doctor Who Christmas special. It looks like the good Doctor will be channeling "The Lion, the Witch and the Wardrobe." Only six more weeks to wait, folks.

Asa Butterfield is the boy who would be Ender Wiggin on the big screen. Orson Scott Card's "Ender's Game" is one of my favorite books and one I've read many, many times. The idea of a movie version makes me nervous - less a question of whether they will mess it up and more of how much will they mess it up. But this kid looks like what I always imagined Ender would look like. I suppose that's a good start.

Bradley Cooper is the Sexiest Man Alive according to People Magazine, and for some reason this is generating controversy. Some people think it should have been Ryan Gosling. Don't we have more important things to argue about? Anyway, Entertainment Weekly puts the two in a face-off and says we first heard of Cooper in "The Wedding Crashers." I say no! Long before that, he was awesome as Sydney's best friend Will Tippin on "Alias."
Posted by Jennifer Campbell-Hicks at 2:16 PM No comments:

In researching my current work-in-progress, which takes place in the late 1930s and includes a scene in a newsroom, I checked out "His Girl Friday" from the library and watched it last night. Fantastic movie. I loved it, even while I was appalled at some of the journalistic practices that the characters took as commonplace. 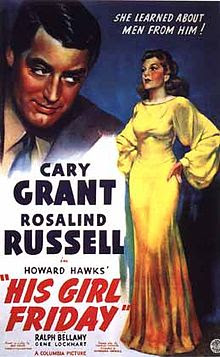 I don't know whether the portrayal of newspapers is accurate for 1940. It might be as accurate as, say, "Never Been Kissed" was to the 1990s. (A copy editor has a private office? And a personal assistant? And she wants to be promoted to being a reporter? Give me a break!) But seeing as I was not alive in 1940 and don't know anyone personally who worked in newspapers in 1940, I'm using this as source material.

A few things that stuck out:

1. Technology, or lack thereof. They use candlestick telephones, and there are two ladies who work a newsroom switchboard. To call someone is sometimes referred to as "sending a wire." Whenever a character picks up a phone, he/she tells an operator how to direct the call. The reporters all write on unwieldy typewriters. The newsroom is plastered with actual paper, everywhere. Nowadays, there's little paper involved in putting out a newspaper; it's all done on computers.

2. Ethics? What's that? The two main characters Walter (Cary Grant) and Hildy (Rosalind Russell) work for a newspaper with a democratic leaning. Today, that would mean the editorial pages take a political slant. Back then, it meant the newsroom did, too. Editor in chief Walter advocates for the state's governor and is determined to force the city's mayor out of office. No one even pays lip service to what is a critical part of the profession today: that journalists are neutral observers. Then there's Hildy, who bribes her way to every scoop she gets. Talk about a corrupt system.

3. Treatment of women. To be fair, the men in this movie treat Hildy pretty much the same as they treat one another. She is referred to as a "newspaper man" over and over. It's Hildy herself who sells herself short. She wants to leave the newspaper business, get married, settle down and pop out some babies - what she calls a "normal life." I know, I know. This was the norm for women during that era. But I still grind my teeth over the idea that a man can have a career and a family, but a woman cannot. She has to choose one or the other.

This movie seriously feels like a cinematic time capsule, but that's what I was after and so watching it was a good use of my time. Plus, it was just darn entertaining.
Posted by Jennifer Campbell-Hicks at 3:40 PM No comments:

Today is one of those cool dates - triple elevens. It's also:

Unfortunately, I'm working today. I would rather spend the day with my husband and kids, but such is the way it goes sometimes. One thing I know I will be doing is spending quite a lot of time playing with my new toy: a Kindle. I've been wanting an e-reader for a while now, so this is cool.
Posted by Jennifer Campbell-Hicks at 8:58 AM No comments:

I took a guided tour today of the Colorado state Capitol building, as it's the location for much of the short story I'm currently writing. Most of what our tour guide said was stuff I had already read online, but I wasn't there for the talk. I wanted to get a feel for the place: its size and atmosphere. I took oodles of photos. One thing I wanted to learn more about was the extensive tunnel system beneath the Capitol that links it to other buildings in the area. But, alas, the tunnels are not open to the public and are now mostly used for storage. I did find one photo of the tunnels in an exhibit. Here is my photo of the photo: 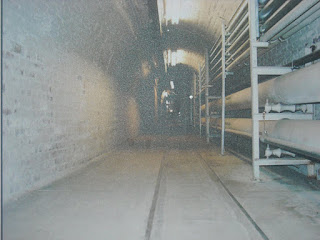 Here's the view coming in from the west entrance, with the grand staircase in the background: 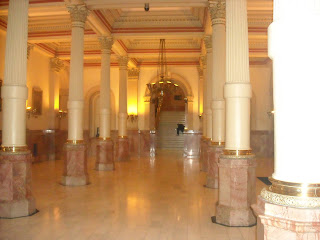 And here's the view from the Capitol dome, facing west toward the City and County Building, Civic Center park and the Rocky Mountains. 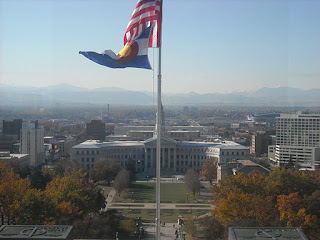 When I wake up each morning, I pour a bowl of cereal and a glass of orange juice and boot up my laptop. Just for the heck of it, here are the websites I usually visit and the order in which I visit them:

1. First up is my e-mail account. I'll accumulate five to 10 messages overnight, most of them junk. There will be stories from Every Day Fiction and Daily Science Fiction in there, too. Those aren't junk.

2. Next is the Hatrack River Writers Workshop. I've had an account there since September 2008 and tend to read posts more often than I respond to them.

3. Next: the Writers of the Future forum. Ditto from above, except my account there is less than a year old. While I'm at it, I might visit judge K.D. Wentworth's message board.

4. After the forums, I go to Duotrope and check the RSS Feed of responses to the various markets I have stories out to at that time. This gives me a good idea of when I can expect my response to pop into my e-mail box.

Writers of the Future, quarter 4

I crow my good news in Writers of the Future on my blog, so I suppose I should own up to the bad news, too. I received my fourth-ever straight rejection yesterday. Honestly, I'm scratching my head over this one. I'm the first to admit that my other three rejects were deserved. This one was not. It's quite possibly my best story to date, but for whatever reason, it rubbed the judge the wrong way. Here's hoping for better luck next quarter.

So, updating the tally in 12 consecutive quarters of entering Writers of the Future:

Posted by Jennifer Campbell-Hicks at 6:32 PM No comments: