General warning: Spoilers ahead. If you haven't watched this movie and don't want to know what happens, turn back now.

Let's start with a confession: I dislike horror movies. I have a low tolerance for being scared. Some people like it, but I'm not one of them. So you might wonder why I would be so excited to watch the remake of Fright Night. There are two reasons, and their names are Marti Noxon and David Tennant. 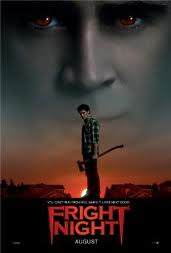 Marti Noxon, who wrote the script, is a longtime collaborator with Joss Whedon and was a writer and co-executive producer for the television show "Buffy," among other things. And I see that influence in Fright Night. Her script is campy fun, like a Buffy episode but with more blood and cussing and better special effects.

The movie is about an insecure teenager named Charlie who finds out his and his mom's new neighbor is a vampire. And this vampire is not the romantic, neutered kind that shows up so often in pop culture nowadays. Jerry (played by Collin Ferrel, who looks to be having the time of his life) is a bloodthirsty monster. And once Charlie learns Jerry's secret, the vamp will stop at nothing to either kill or turn the kid.

Enter my second reason for watching the movie: David Tennant. The former Doctor Who star plays Peter Vincent, a flamboyant Las Vegas showman and self-styled vampire expert. Tennant steals every scene he's in. Charlie goes to Vincent for help, but Vincent is much better at running away from the supernatural than he is at fighting it. Until he finally grows a pair and shows up for the climactic fight decked out in vampire-killing gear. "Let's kill something," he says.

At several points while watching this movie, I found myself hooting or clapping appreciatively. For instance, I've always wondered why, when a vampire is barred invitation into a house, he doesn't just burn the thing down. Jerry does. In most fantasy/horror movies and television shows, a strong swipe at the neck with a sword or axe will result in a beheading. Here, the axe blade gets stuck on the bone and can't finish the job.

With most movie rentals, I watch the disc once and send it back. "Fright Night" is worth a second viewing, hopefully with my 15-year-old son who - unlike me - loves a good scare.
Posted by Jennifer Campbell-Hicks at 3:19 PM