As of a half-hour ago, I am entered in Quarter 2 of Writers of the Future, which is my 14th consecutive submission in the contest. I have never cut it so close to the deadline, which is about six or seven hours from now. I've spent the past week making a critical revision to my story. My protagonist has a goal, but she had no deep, driving, personal motivation for achieving that goal. As a result, my readers would have no reason to care whether she was successful for not.

That's fixed now. I finished the rewrite last night about 2:30 a.m., and I'm happy with the result. However the story places (or doesn't place) in the contest, I've given it my absolute best effort.

Posted by Jennifer Campbell-Hicks at 4:34 PM No comments:

Anything that can go wrong ...

This is why you shouldn't push a story to the last minute. The current quarter for Writers of the Future ends tomorrow, which is the drop-dead deadline for submitting my story. I've been working on this story for almost two months, going through a first draft, a redraft, and now a significant revision. I'm down to one last scene. I had planned to work on revising that scene before work, but I woke this morning to find that my laptop has crashed. So I will likely be staying at work after my shift to use my computer here.

If I win Mega Millions tonight (yeah right ...), my first stop tomorrow will be the Apple store for a shiny new laptop.
Posted by Jennifer Campbell-Hicks at 2:25 PM No comments:

Watering at the mouth yet for Season 7? This might slake your thirst for a little while. But it's still a long, long wait until the fall.

Posted by Jennifer Campbell-Hicks at 3:38 PM No comments:

Writing progress and other things

Here's how the story process has gone this quarter for Writers of the Future:
I finished the redraft two days ago and sent it to my first readers, who are doing a fantastic job of sending me their feedback in record time. I appreciate this because the quarter ends March 31. I have only a week to get my story into submission shape. That week also happens to be my kids' spring break, which means I'll be spending time doing things with them when I usually would be writing. It'll be interesting, squeezing out time for revisions.

In completely unrelated news, here is the woman who will replace the Ponds aboard the TARDIS: 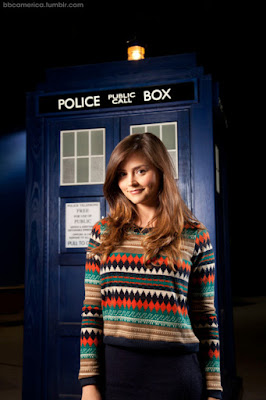 The actress' name is Jenna-Louise Coleman, and I know nothing about her except that she looks adorable in a sweater. And she's going to have to be pretty awesome to make me OK with Amy and Rory checking out of Doctor Who.
Posted by Jennifer Campbell-Hicks at 12:16 PM 1 comment:

Labels: Doctor Who, Writers of the Future, writing progress

Cat is out of the bag

Last August, I made my best sale to date to Digital Science Fiction, an up-and-coming pro-level market publishing e-book anthologies. My story was to appear in the sixth anthology, due out this April. In October, I got some disappointing news that Digital was putting new anthologies on hold for the foreseeable future. I was also asked to not say anything publicly, and so I kept the news to myself.

Editor Michael Wills has now blogged about the Digital Science Fiction silence. I'm happy to see that he plans to continue with the anthologies at some point in the future. I will be happy to submit more stories there when he does
Posted by Jennifer Campbell-Hicks at 5:00 PM No comments:

A little talk about football

Let's start by getting this out of the way: I am not a football fan. My husband is fanatical. He loves the Cowboys. He's been playing fantasy football since before most people knew what it was. But not me. I tolerate football.

But that's over now. The Broncos are signing Peyton Manning, which means they will go back to being a typical boring football team. Even if they win the Super Bowl, which is obviously what they're aiming for, I won't be watching. The magic will be gone.

I can't see how Tebow will stay in Denver now. Last season, he led his team to an incredible, improbable winning streak and to the playoffs. This season, he would be watching from the bench. He could probably benefit from learning from someone like Manning, but I doubt it will happen. Besides, anyone think Manning would put up with the fans screaming his backup's name every time he flubs a pass?
Posted by Jennifer Campbell-Hicks at 3:28 PM No comments:

I love this time of year. On my run this afternoon (in weather warm enough for shorts and a tank top), I saw crocuses in bloom. And in downtown, there are daffodils. A few smallish trees are starting to put out their leaves. March and April are historically the snowiest months of the year here, but in between storms, it's warm and beautiful.

For the middle of March:

Writing: I've been busy redrafting a story to submit to Writers of the Future. The deadline for the quarter is in two weeks. I'll make it, but barely. I also wrote a flash piece. Grand total of new words: 3,500. That's well ahead of my modest goal of 2,500 by the middle of the month.

Submissions: I've sent out five new submissions in March, with a total of six stories on the market. Days out range from 0 to 161.

Reading: Not as much as I would like. I'm almost done with the current issue of Asimov's and will dig into Analog after that.
Posted by Jennifer Campbell-Hicks at 9:34 PM No comments:

Writing progress and other things

Since the start of the month, I've been working through a redraft of my next Writers of the Future entry. Mostly my focus has been on replacing infodumps (i.e. characters talking about what's going on) with action scenes. I'm also simplifying the plot, boosting conflict and clarifying themes. An unexpected side effect of all this is that the redraft is coming out several hundred words shorter than the first draft.

I finished Tobias Buckell's novella "The Executioness" last night and enjoyed it a lot. I'm also working my way through the most recent issue of Asimov's magazine. The only story so far to blow my socks off is "Riding Red Ted and Breathing Fire" by Carol Emshwiller.

And in the life of the Hicks family, my daughter has viral conjunctivitis, otherwise known as pink eye. But being the viral kind, medicinal drops won't help. We have to wait for it to go away, which the doctor says will take about a week. In the meantime, she can't go to preschool and will be hanging out with boring old mom in the afternoons. I think I've already failed in my goal of preventing anyone else in the family from contracting the pink eye. The virus' next victim: me.
Posted by Jennifer Campbell-Hicks at 10:11 PM No comments:

That's the number of page views this blog has gotten since its creation in August 2008. Whoop! In celebration of this momentous, world-changing event, here are the most popular posts ever for Jennifer's Musings:

Is Firefly Coming Back?: This one is the runaway winner with 1,818 hits, which goes to show that even 10 years later, you can't stop the signal.

Doctor Who: The Impossible Astronaut: 340 of you wanted to read about my Lost-style speculations after the Season 6 premiere. In retrospect, I didn't guess too badly.

The Social Network: 209 hits. I disliked the movie and still stand by my review.

Doctor Who: The Rebel Flesh: 82 views. This was one of my least favorite episodes of Season 6, and I really didn't have much to say.

Doctor Who: Favorite Season 5 moments: 81 views. You all really like Doctor Who. Me, too. Obviously.

A little crazy, a lot of happy

And now I will take a moment to go "Whoo!" and do a happy Snoopy dance. Because Fiona Apple is releasing her first album in seven years this summer, called ...

The Idler Wheel is wiser than the Driver of the Screw, and the Whipping Cords will serve you more than Ropes will ever do.

Yeah. Fiona, I have missed your crazy. I suspect this one will get shortened to The Idler Wheel, just as another of her album titles was shortened to When the Pawn. That one went on for 70 or 80 words. I don't usually get excited about an album release (not like I do about a movie or book release, such as Naomi Novik's new one coming out this week), but Fiona Apple is one of my favorites.

And here's one of my favorite of her songs, from her first album:

Posted by Jennifer Campbell-Hicks at 12:54 PM No comments:

We're starting off March here in the Mile High City with clouds and snow. All day. Blech. Also the muscle spasm in my shoulder is acting up something awful, and I started the day with a story rejection in my e-mail box. So here's a little something that makes me smile.

Posted by Jennifer Campbell-Hicks at 3:59 PM No comments: