Today is one of those days that reminds me of the amazing healing power of exercise. I had a horrible morning on several fronts: physical, financial and in writing. I got one of those rare rejections that I had such high hopes for (as in my high hopes were rare, not the rejection itself), and I immediately burst into tears. But after I calmed down, I pulled on my running clothes and shoes and went out into the neighborhood. I ran for about 3 1/2 miles without stopping and afterward felt much better about the world. There's so much out there that I can't control, and on days like this it makes me feel helpless. But when I'm running, it's only me and the pavement. I love how strong I feel. It helps me remember that I can push through whatever obstacles the world throws at me and keep going. And keep running.
Posted by Jennifer Campbell-Hicks at 9:10 PM No comments:

Nothing scares me more than the prospect of destruction on a planetary or universal scale. Sometimes I have difficulty sleeping after watching such a movie, and yet I keep putting them on my Netflix list. There must be something wrong with me. Anyway, this time it's "Melancholia" - a ponderous film that hammers you over the head with how beautiful The End will be. 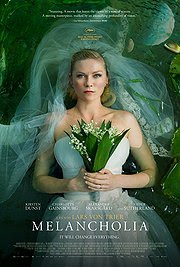 The movie opens with a succession of gorgeous, slow-motion images of what happens in the Earth's final moments, ending with a newly discovered planet slowly closing the gap with Earth and smashing into it. The setup takes eight minutes, and then - knowing how it's going to turn out - we get to the story.

It's about two sisters, depressed Justine and loving but frustrated Claire. The movie's first part focuses on how badly one woman (Justine) can screw up her own wedding. The second part is more interesting. The closer the planet Melancholia gets to Earth, the more Justine comes back to life and the more Claire - who also has to worry about her grade-school son - descends into debilitating fear.

There's a horrible sense of helplessness about the whole thing, which is the part that scares me most about these kinds of movies. The protagonists can do absolutely nothing to change their own fate or that of the human race. The only decision anyone can make is how to die. No wonder Justine is depressed.

Despite the horrible and inescapable ending, those final seconds - in which a massive blue planet fills the sky, dwarfing the three humans who sit terrified in an emerald green pasture - are very, very beautiful.
Posted by Jennifer Campbell-Hicks at 6:05 PM No comments:

Those of us in the Writers of the Future community -- and the science-fiction community as a whole -- woke to shocking, sad news this morning: writer, former winner and presiding judge K.D. Wentworth passed away on April 18. She was 61.

I never met Kathy, but this is upsetting news for me nonetheless. The first time I entered Writers of the Future, she awarded me an honorable mention and sent back the first page of my story with a handwritten note of encouragement. That little note meant the world to me. Amid reading hundreds of entries, she took the time to tell me I was on the right track. I didn't plan to enter the next quarter, but after receiving that tiny bit of encouragement, I sent off another story, and another, and another. Two years and many entries later, I received a full critique from her, and her insight and advice were spot-on.

In an industry in which impersonal rejection is the norm, K.D. Wentworth gave encouragement and hope to hundreds (thousands?) of new writers to keep trying. To not give up. I will appreciate that always.
Posted by Jennifer Campbell-Hicks at 4:00 PM No comments:

Congratulations are in order

Less than 24 hours after watching the Writers of the Future winners accept their awards in the annual ceremony, I came to work today to find out about a winner of another sort. Craig Walker, a photographer for The Denver Post, has won his second Pulitzer in three years. The guy is amazing, all the more for being such a nice and humble person.

If you want to see how well someone can tell a story through photography -- and an important story at that -- check out Craig's winning entry here.

And here is the Denver Post story on his win.
Posted by Jennifer Campbell-Hicks at 4:29 PM No comments:

Here we are already halfway through April. How the heck did that happen? This year is flying by. Flying, I tell you. Tonight I will be watching my good friend Nick T. Chan -- and a whole bunch of other great writers, too -- receive their due at the Writers of the Future awards ceremony. Alas, I cannot go in person, so I must settle for instant streaming. Maybe next year, it'll be me up on that stage. I can only hope.

I finished reading Timeless by Gail Carriger a couple days ago, the fifth and final book in her Parasol Protectorate series. I've enjoyed every page of the series and am sorry it's over. Next on my reading list is Mary Robinette Kowal's Glamour in Glass. She'll be here in Denver signing at the Broadway Book Mall on April 26. Come out to the signing, if you can.

Now, onward with the mid-month stats.
Posted by Jennifer Campbell-Hicks at 3:19 PM No comments:

And watch out for evil bunnies.

Posted by Jennifer Campbell-Hicks at 10:47 AM No comments:

Nominees for the 2012 Hugo Awards and the John W. Campbell Award for New Writer have been announced. You can see the full list here.

As usual, I haven't read many of the fiction nominees.
And as usual, I'm most familiar with the film and television categories. I've seen four of the five long-form nominees and am rooting for either Harry Potter or Game of Thrones. Doctor Who dominates the short-form category with three nominations. The best of those episodes is "The Doctor's Wife" -- although "The Girl Who Waited" gets better every time I watch it.

Congrats to all the nominees. The winners will be announced at WorldCon, held Aug. 30 - Sept. 3 in Chicago.
Posted by Jennifer Campbell-Hicks at 6:06 PM No comments:

I wonder how often this happens

My 7-year-old is the sweetest boy a mother could ask for (not that I'm bias or anything). He has sensory processing disorder, which has resulted in developmental delays in his motor skills, so until last year he was in his school's special education program to get the extra help he needed. He's also very impulsive, and I hear some interesting stories from his teacher. For instance, my son recently took in a lesson while half out of his desk with his head on the floor.

This week, the school psychologist tested him for the gifted and talented program. I've always known he's whip-smart, but I didn't expect anything to come of the testing. Instead, he tested at a "superior" level. He's well above the threshold for being considered gifted. The appropriate people at his school will now come up with a plan to help him reach his academic potential, which will go into effect next school year.

The upshot of all that: My son is both remedial and gifted.

Now I'm no dummy. I skipped a grade in elementary school. (As a side note, that destroyed my social life for years after and I absolutely will not allow anyone to do that to my son.) I graduated high school with a 3.9 GPA and college with a 3.8. I suspect that by the time my son hits high school, he will be leaving me in his intellectual dust.

It's overwhelming to think about that with my sweet, impulsive boy who has difficulty forming his letters and wants to operate a crane when he grows up. I am looking forward more than ever now to see where his life's journey takes him. I don't think it will be to a construction site.
Posted by Jennifer Campbell-Hicks at 4:15 PM 3 comments: