I'm happy to announce that "Father Francis and His Mechanical Bees" will appear in Every Day Fiction. This is the second story of mine that EDF has accepted this month and the fourth overall. There's only one tiny downside to this: All of my flash pieces except one have now sold, and the spate of sales has seriously depleted my number of stories out on submission. My goal for October: Write new flashes and get them out on the market.
Posted by Jennifer Campbell-Hicks at 8:43 AM No comments:

Submitted for Writers of the Future

Today I sent off my 16th straight submission to Writers of the Future. For most of this quarter, which started July 1, I've struggled with writing an entry for the contest. Two weeks ago, I finally hit on an idea that I could get excited about. I pounded out the first draft in a week and spent another week revising and polishing. Now that I've submitted for Quarter 4 and that monkey is off my back, I can commence with wondering how my Quarter 3 story will fare. Oh, and with writing the next one.
Posted by Jennifer Campbell-Hicks at 11:46 AM No comments:

Labels: Writers of the Future, writing

I'm happy to announce a story acceptance to a fantastic new magazine, Fireside, that has published the likes of Tobias Buckell and Ken Liu. Sometime in the coming months, they'll publish my science-fiction story "Catch a Fallen Star." Fireside's announcement post is here. This magazine funds each issue through Kickstarter, and the campaign for issue No. 3 starts Oct. 1. Be sure to donate!
Posted by Jennifer Campbell-Hicks at 1:50 PM No comments:

Sales! And other writing news

The past couple of weeks have been crazy busy, which is the reason for my blog silence. First the good news: I sold two stories last week within hours of each other. One is "Caged," a science-fiction flash story that will appear in one of my favorite markets, Every Day Fiction. The other I can't say anything about yet except that it's awesome. How's that for a teaser? I will give details when I can, hopefully sometime in the next few days.

I've been working on a couple of projects this week. My priority right now is to finish my next Writers of the Future entry. For most of this quarter, I've been waffling about what to write, starting stories and then abandoning them. I finally hit on an idea I love last weekend -- two weeks before the entry deadline -- and have been writing the story longhand over the past few days. The first draft is done. I'm in the process of transcribing it onto my laptop, along with some revision and polishing.

My other project harkens back to the goals I set for myself for 2012: the publication of my first ebook. I hope to have it up at least for Kindle readers in the first week of October and Smashwords soon after that. More details to come.
Posted by Jennifer Campbell-Hicks at 11:24 AM No comments:

Doctor Who: Asylum of the Daleks 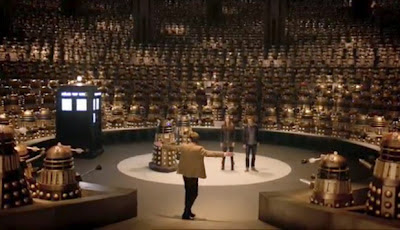 Woot! Doctor Who is back, and boy is it back in a big way. The season seven premiere delivered on all sorts of levels. My thought processes went something like this: Hey, look, daleks are scary again! No, Amy and Rory, what happened? Oh my God, is that ...? No, it couldn't be. Holy crap, it is her!

Stop now if you haven't watched.

The biggest development by far is the surprise first appearance of Jenna-Louise Coleman as Oswin, who will be taking over for Amy and Rory on companion duties later this season. She's a survivor of a spaceship crash on a planet populated by insane daleks. She makes souffles, hacks the daleks' computer systems and completely out-manics the Doctor -- and she does it all without being the least bit annoying. Coleman absolutely steals this episode, and opening her character's arc in the first episode of the season is a touch of genius by Steven Moffat.

This is Oswin's end, reminiscent of the introduction of River Song, albeit even more tragic because Oswin has been converted to a dalek and doesn't know it. This creates a rich arc for the coming season. The Doctor will, sooner or later, figure out that he and his new companion have crossed paths before (or later, from her point of view) and that he cannot rescue her from her eventual fate. If he does, and she's not on the dalek planet when she's supposed to be, the Doctor, Amy and Rory will die there. I'm pumped to see where the writers take this, and I'm confident now that the role of companion will be in good hands.

Now for the rest.

The Doctor
Anyone who's #newtowho might have gotten a skewed impression of the Doctor from this episode. He wasn't as goofy and childish as he usually is. He seemed to have a lot of anger boiling just below the surface. Granted, he's dealing with his most ancient enemies, the ones who forced him to destroy his own race, but overall this Doctor comes off as older and more weary. The years (centuries?) have worn him down.

The Ponds
Pre-episode, I believed that some outside force had driven Amy and Rory apart -- but, no. They did it to themselves. Seeing them angry and bitter is painful. On the one hand, I'm relieved they reconciled before the hour was out. On the other, divorce is such a huge plot development that it should have taken another episode or two for them to work through their issues, maybe even all the way to episode five in New York. It would be very "Joss Whedon" of the show to reconcile Amy and Rory, only to have Something Horrible happen five minutes later.

The Daleks
In my opinion, the last time the daleks posed a credible threat to the Doctor (or to anyone) was in the first season episode "Dalek," in which one lone little pepperpot wiped out an entire fortified underground bunker and almost killed Rose in the process. The daleks have never seemed the least bit frightening since, until this episode. The "eggs" scene with Rory was chilling; he's lucky that insane daleks don't have very good aim. And what they did to Oswin was truly horrifying.

One last thought on this episode: Unlike last year's premiere, this one stands on its own. Perhaps that means we'll be seeing fewer complicated season-long arcs and more rousing standalone adventures like this one. I hope so.
Posted by Jennifer Campbell-Hicks at 11:52 AM No comments:

It's been nine months since the last time we got any new Who, but tonight is the season seven premiere. I've been watching the Pond Life minisodes online this week, which were all adorable and fun until the last one. SPOILERS AHEAD I suspect the "Ood on the lou" that also likes to make breakfast and wash clothes told the Ponds something cryptic and horrible about their future, and Rory thought the only way to keep Amy safe was to leave her. I doubt he left because of "irreconcilable differences." I mean, come on, this is the Last Centurion who stood guard over Amy in the Pandorica for 2,000 years. A man like that doesn't just up and leave at the first sign of trouble. We'll find out soon enough.

In celebration of the new season, I'm going to go back through some of the most memorable moments of season six. MORE SPOILERS AHEAD.

The Doctor dies, "The Impossible Astronaut"
Of course we now know that he didn't die. At that fixed point in time on the banks of Lake Silencio in Utah, River shoots a robot body with a miniaturized Doctor inside, who makes it out completely unscathed. But when "The Impossible Astronaut" aired, I was shocked and bursting with questions. Who killed the Doctor and why? Who was the little girl who called Nixon? What's up with the Silence? And when the Doctor's closest companions build a floating pyre and mourn while his body burns, I admit I teared up a little, too.

The Doctor and the TARDIS say hello, "The Doctor's Wife"
Episode writer Neil Gaiman gave us one of the best Who episodes in a long time with "The Doctor's Wife," and he uses a plot device that works only once: Put the spirit of the TARDIS in a human body. But such a body cannot hold her for long. After a fantastic sequence of scenes in which the Doctor and the TARDIS get to say the things to each other they've always wanted to, the TARDIS returns to to her rightful place inside the ship. But before she goes, and while the Doctor cries and asks her to stay, she tells him one last thing: "Hello."

River is Amy and Rory's daughter, "A Good Man Goes to War"
I thought about including the revelation that the Amy on the TARDIS is a ganger and she has been abducted and is pregnant to boot, but really that's only a step toward the Big Reveal of River's parentage. River Song is Melody Pond. The Doctor is giddy when he figures it out. Amy and Rory are stunned. And the entire Who fandom goes, "I knew it!"

Old Amy and Rory at the TARDIS door, "The Girl Who Waited"
This entire episode kicks ass, but the scene at the end at the TARDIS door with Old Amy on the outside and Rory on the inside is heartbreaking. Rory can't let her in or TARDIS will not be able to sustain the paradox of two Amys the Young Amy inside will vanish. So Old Amy tells Rory not to open the door. After decades of waiting for the Doctor and Rory to come back for her, she chooses to sacrifice herself so that it will have never happened. Also, Karen Gillan knocks this performance out of the park.

The question the Doctor must never answer, "The Wedding of River Song"
Silence Will Fall. The Question That Must Never Be Answered. These are things that have been hinted at since the Eleventh Doctor first crash-landed in Amy Pond's front yard. In the final scene of last season's finale, we finally hear the question, and it's obvious and intriguing all at the same time: "Doctor Who?" If the Doctor ever answers the question, the implication is that Very Bad Things will follow.

Now, onward with Season Seven and the last stand of the Ponds.

Posted by Jennifer Campbell-Hicks at 1:30 PM No comments: