Doctor Who: The Snowmen 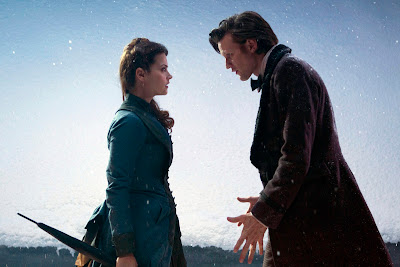 For Christmas this year, I wanted a really good Doctor Who special. And unlike last year, Steven Moffat delivered. The evil snow globe/ice woman plot line doesn't hold together very well, if you stop and think about it for a minute. If it takes nine months to ice-ify one woman in a pond, then how does this signal the end of humanity? But the villain is secondary to this episode. The point, of course, is to introduce the Doctor's new companion. And in that, we have a roaring success. Clara is fun to watch. Jenna Louise-Coleman has fantastic chemistry with Matt Smith. And I'm a sucker for romance, which has been missing ever since Rose left the TARDIS. I wonder what River will think of the flirty, feisty souffle girl Clara Oswin Oswald.

But you can read reviews and recap just about anywhere. Here, I'm going to speculate on the questions we were left with at the end of The Snowmen. (Because it wouldn't be a Moffat episode if we weren't left with some mysteries.) Unsurprisingly, all the questions are about Clara.

What's up with Clara?
She died in Asylum of the Daleks. She died in The Snowmen. Both times, in dying, she saved the Doctor. But she's still out there in another time, as we see when modern-day Clara is hanging out with her own tombstone. The Doctor says this is impossible. He also said, at the opening of The Snowmen, that he's been saving the universe for a thousand years and the universe doesn't care. Maybe this is the universe's way of telling him it does care. He essentially made a deal with the cosmos that he would stop the Evil Snow Globe of Death if Clara were allowed to live. The Doctor got what he wanted, though not in the way he expected.

How many Claras are out there?
Beats me. At least three. Which one is the original Clara? Probably the one who will end up in the TARDIS with the Doctor

Is she human?
I'd say yes. It doesn't seem that she's aware that she's reincarnating, despite repeating her dying words to the Doctor. Then again, we do see her modern-day incarnation standing right beside her own tombstone. Is that coincidence, or does she remember her past (and future) lives?

What's causing her to reincarnate?
My completely uninformed guess: At some point in her travels with the Doctor, something happens to her that causes her to be born and reborn and reborn again. Because the reincarnations seem to span all of space and time, it might have something to do with the TARDIS. Or a temporal shift or loop. If it were the TARDIS, that would explain why her lives (and deaths) are linked to the Doctor. And I wouldn't be surprised if it also somehow plays into the Fields of Trenzalore and the question that must never be asked.

But ... we have to wait until April to learn more.
Posted by Jennifer Campbell-Hicks at 2:08 PM