The news today is that Amazon has made a deal with Alloy Entertainment to allow fan fiction writers to write in Vampire Diaries, Pretty Little Liars and Gossip Girl and get paid for it. This is part of the new Kindle Worlds program, and they're planning on announcing more licensing agreements in the near future. This has implications for fan fiction writers, for professional writers who do media-ties and fan fiction readers, and not all the implications are good.

As a former fan fiction writer myself, on the surface this sounds great. Getting paid for writing with someone else's world and characters? Great, right? Not so much. Before you decide to get involved in the program, take a look at the contract terms. You can read about it in more detail on John Scalzi's blog right here, but the gist is that the entertainment company can take your original ideas or characters and use them for their own purposes without paying you a cent, and Amazon can use your story for any purposes it wants without paying you a cent. Basically, you're giving up any rights you might have to your own creations. Bad, bad idea, folks.

As time allows, I'll look into this more and blog about it. In the meantime, for more information and thoughts from writers in the trenches, you can start here:

Posted by Jennifer Campbell-Hicks at 1:56 PM No comments:

Doctor Who: The Name of the Doctor 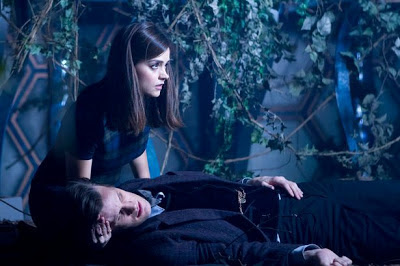 This is the episode I've been waiting for since April. It's not perfect. There are a few flaws, which we'll get to. But setting those aside, "The Name of the Doctor" is the best episode we've had since the season premiere. You can read recaps elsewhere, so I'm going to break down what I thought were the best aspects of the episode and a couple of things that Moffat and Co. could have done better.

Clara: The Impossible Girl
The mystery of the Impossible Girl was the No. 1 thing that I wanted this episode to tackle. Clara's character has suffered because of the focus on what she is instead of who. I'm glad to say that the answer for why she has been popping up all over time and space is simple, satisfying and believable. It didn't feel like a stretch at all, unlike the resolutions to some other Moffat mysteries over the years. And I loved the opportunity to see many of the older incarnations of the Doctor. Now that we're done with this mystery, I hope that Clara can simply be Clara and we will get some character development next season. (Because I've found Clara's echoes to be much more interesting and entertaining than Clara herself.)

(Side note: When "The Snowmen" aired, I wrote this, and it turns out I wasn't too far off the mark: "My completely uninformed guess: At some point in her travels with the Doctor, something happens to her that causes her to be born and reborn and reborn again. Because the reincarnations seem to span all of space and time, it might have something to do with the TARDIS. Or a temporal shift or loop. If it were the TARDIS, that would explain why her lives (and deaths) are linked to the Doctor. And I wouldn't be surprised if it also somehow plays into the Fields of Trenzalore and the question that must never be asked.")

The Fields of Trenzalore
What a fantastic idea to make this planet the site of the Doctor's tomb. Besides the emotional trauma of seeing your own grave, the Doctor faces multitudes of paradoxes in crossing his own timeline. In fact, he literally comes face to face with his entire timeline, from the first time he set foot in the TARDIS to his death, in the form of a pillar of wibbly-wobbly light. And the huge TARDIS also blew my mind. But I do have a gripe with how things went down on Trenzalore and that is ...

Silence Will Fall
We've been teased about what will happen on Tranzalore ever since Matt Smith's first episode. From the Silents to Dorian's warnings, there's been a multi-season buildup to what will happen to the Doctor and indeed the entire universe if he speaks his name on the fields of Trenzalore. So here we are at the moment, and the payoff is not nearly big enough. What happens if the Doctor speaks his name? A door opens. Granted, that door leads to the Doctor's time stream, and if that time stream is destroyed, the universe goes with it. Hence the silence falling. But I can't help it: I wanted something more dramatic than opening a door. In the end, the catastrophe is averted too easily and too quickly, and the Doctor doesn't say a word. It's River who says his name, and she does it with such nonchalance that it cheapens the importance of the act. I wanted much much more. My only consolation is that we don't hear what River says, thank goodness. And speaking of River ...

River Song
I like the idea of seeing River after her death, but her appearance needed more clarity. If she's a digital echo of herself, how can she be physically there? How can the Doctor touch her? I loved the kiss between them, but it seems like it shouldn't have been possible. And did this feel to anyone else like River's final appearance? She might turn up again, but with the kiss and the good-bye, I felt that this might have been Moffat's way of closing out the character.

The Doctor and The Doctor
I'd be remiss if I didn't mention the last few seconds of the episode. Another incarnation of the Doctor makes his entrance, and he's John Hurt, and he's the Doctor's deep dark secret. But what exactly is he? A future incarnation? The Valeyard? A previously unmentioned incarnation that, perhaps, ended the Time War? We won't find out anytime soon. All I can hope is that the new Doctor will not be made into a mystery, that we will be told straight up who he is, where he fits into the Doctor's timeline, what he did and, most importantly, what he wants now. Only when we have all the information will we be able to truly enjoy what has the potential to become an epic battle between the Doctor and himself.
Posted by Jennifer Campbell-Hicks at 1:48 PM No comments:

Anyone who reads my blog on a semi-regular basis knows I love Doctor Who. It is hands down the best science fiction on television. You also might have noticed that I haven't been recapping episodes this year. That's partly because I don't have the time and partly because this season hasn't excited me the way previous seasons have. I enjoyed the final farewell of the Ponds and was intrigued by the idea of the new companion. But Clara hasn't panned out as I had hoped.

Clara is an interesting experiment. She's a character with a Big Mystery. (Side note: Didn't we already do this with River?) We don't know who/what she is. The Doctor doesn't know who/what she is. And Clara is clueless, not realizing that there's any Big Mystery at all. But what that means is that for five or six episodes now, ever since "The Bells of Saint John," Clara hasn't been a character at all. She's a character-in-waiting. A blank slate. A Big Mystery in need of solving instead of a person. And that simply doesn't work when she's the co-star of the show.

Don't get me wrong, I love Jenna Louise Coleman. She's cute and perky and brings a totally different vibe to the TARDIS than Amy and Rory did. I loved her in "Asylum of the Daleks" and "The Snowmen," but not so much since. When she made her first appearance, didn't we hear a lot about how she can out-manic Matt Smith's Doctor? How Clara was going to give the Doctor a run for his money intellectually? I'd like to know: Where is that companion?

Tonight's season finale is called "The Name of the Doctor." OK. I don't want to know the Doctor's name. That's a mystery that is part of the show's canon and should never ever be revealed. Rather, tonight, I want to see the mystery of Clara solved so that we can all get past this "who/what is she" crap and get on with filling in the lines of her character and having some romping good adventures without any mysteries hanging over us. I'm so, so tired of Moffat's mysteries. Who's with me?

I will post my thoughts on the finale tomorrow, so stay tuned.
Posted by Jennifer Campbell-Hicks at 11:46 AM No comments:

What I'll be watching this fall

The television networks made a big deal this past week over their new shows for the fall schedule. Only three of them caught my interest. Of course they're all shows with a science-fiction or fantasy bent, and here they are (along with some trailers):

1. Agents of S.H.I.E.L.D., ABC
Joss Whedon does a Marvel show. Of course I'm going to watch. Plus, there's J. August Richards from "Angel," and Agent Colson is alive. This will most likely be awesome.

2. Almost Human, Fox
The main draw for me on this one: Karl Urban. I've been a fan since his days on Xena: Warrior Princess, back when he wasn't well-known. It's been fun to watch his rise to bigger and bigger roles, and now a television show in which he plays a futurist cop teamed up with an android. Also, the producer is J.J. Abrams. I'm not as sure that this one will work as I am of S.H.I.E.L.D., but I have high hopes.

3. Once Upon a Time in Wonderland, ABC
I already watch Once Upon a Time, and this one looks like an intriguing spinoff. The show it's based on has fallen off in its second season (here's hoping it can get back on track with the Evil Neverland plotline), but I like the idea of Alice in a mental ward. I'm willing to give it a try.

How could this combination go wrong? Free comic books on Star Wars day! Every year, I take my kids to the local comic book store on the first Saturday in May, and they have a great time picking out books and ogling all the folks who show up in costume. None of the free comic books really interest me this year, but there are plenty of titles that will appeal to my kids -- and that's the way it should be.

Also, Saturday is Kentucky Derby day. My pick to win: Revolutionary. But in the work pool, I drew the horse Palace Malice. I guess that means I'm rooting for them both.

It's the start of May, so let's do a quick writing/submissions update.

Posted by Jennifer Campbell-Hicks at 5:51 PM No comments: