Stuff and fluff is on cloud nine

The week that was ... was fantastic. I reached a goal I've had for five years, which goes to show that insane determination eventually pays off. Because of the congratulations that have poured in, I might fool myself into thinking I actually won Writers of the Future, but no. Five unlucky finalist stories every quarter don't make the cut. Over and over, I've watched this happen to friends and writing colleagues. So I'm not straining too hard to pat myself on the back just yet. (Besides, the scoliosis makes that kind of difficult.)

But, for a moment, a happier thought. Writers are told to use visceral reactions, but rarely do I experience a big visceral reaction like those I put into almost every story. On Wednesday night, I did. The phone rang about 8:30 p.m. while I was stuck in stop-and-go traffic in a construction zone on the interstate. The caller ID said "unavailable." I was pretty sure I knew who was calling, and then was more sure when the person left a voicemail. After five long miles, I pulled off at my exit into the parking lot of a gas station and listened to the message. If I were to write what happened next as a scene in a story, it would go something like this:


She snapped shut her flip phone and stared at the hastily written phone number on the scrap paper in her lap. Her chest tightened. Something between a sob and a hiccup escaped her lips. Then another sob, and another. No, this wouldn't do, not sitting in her Corolla under the harsh lights of the Conoco parking lot. She took deep breaths, and when she was calm again, she dialed the number.

"Hello," she said in a casual, friendly tone. "May I speak with Joni Labaqui, please?"

So there you go. Yep, I almost cried.

Submission this week: None. One last week, though.

And now I'm off to finish polishing my next Writers of the Future entry, which is due in three days. One of these quarters, I'm not going to push it right to the deadline.
Posted by Jennifer Campbell-Hicks at 8:47 AM No comments:

Labels: Writers of the Future, writing

Writers of the Future Quarter 3

Anyone who's been dropping by my blog for the last, oh, five years, recognizes that I post these updates on my Writers of the Future finish every quarter. (Actually, last quarter I skipped, but that's neither here nor there.) Every quarter except one in which I made semi-finalist, I've reported an honorable mention or rejection. So I'm very happy to share the news that this quarter, I am a finalist!

I had convinced myself several quarters ago that I was never going to break through that ceiling, that my writing style and the sorts of things I write aren't suited for this contest's judges. At least for this quarter, I'm happy to admit I was wrong. I hit the bull's-eye ... or pretty close to it. Out of eight finalists, three are chosen as winners. All other things being equal, the odds are against me pulling out a win, so I'm preparing myself for a sadder result. But win or lose, this is a big achievement for me.

Labels: Writers of the Future

Most of the time I keep an even keel on writing, weathering the rejections and the critiques and my own critical eye. But this past week, I've felt somewhat bipolar. A week ago, I was hosting a pity party for one, feeling like my writing sucks and I suck and why am I even bothering? Today, it's the opposite. Today I feel like this:

Posted by Jennifer Campbell-Hicks at 11:18 AM 2 comments:

Saturday's stuff and fluff is soggy

This past week has been devastating for Colorado's Front Range, from Colorado Springs to Fort Collins and every place in between. I feel very lucky that none of my family members have been flooded out (that I know of, at least). Our house is fine. Our neighborhood is fine. But drive 15 miles up the road to Boulder, and it's a different story entirely. The week has also proved exhausting in the day job. The Denver Post has been all over this story in a kick-ass way. Reporters, photographers and videographers are spread across the state, and here in the newsroom, those of us on the copy desk and production staff have been working hard to put all that coverage in the newspaper.

As you might expect, the intensity of the day job and the general stress of living in an area that has gotten 10 inches of rain (give or take) in a matter of days has not put me in a writing sort of mood. But I'm trying. I want to finish the rewrite on my work-in-progress this week and get it out to my first readers in time for comments to meet an end-of-the-month deadline.

I've also received the galleys for my story in the upcoming anthology Raygun Chronicles: Space Opera for a New Age. The table of contents is packed with fantastic writers. And the cover is beautiful. The editor has posted the cover image to the Kickstarter page for the anthology, so I don't think he'd have a problem with me sharing it here: 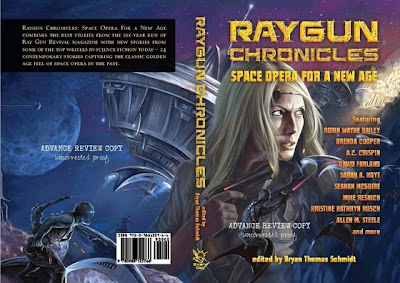 Submissions this week: A big fat zero. All my stories that are in shape to go out on submission are in editors' slush piles. I expect I will receive responses on at least a couple of them in the next few days.
Posted by Jennifer Campbell-Hicks at 2:21 PM No comments:

I took my dog for a walk this morning along the trickle of water that runs through my neighborhood, and this is what it looked like. The creek's name is Little Dry Creek. Ponder the irony of that for a while. 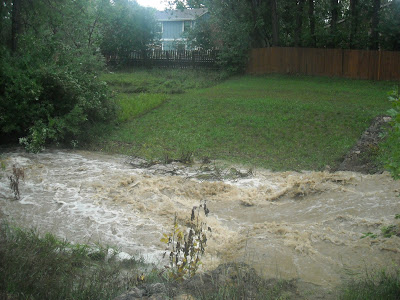 The water treatment plant in our city is offline because of too much silt. Interstate 25 north of here is closed because it has disappeared under a lake. Thousands are being evacuated from the worst-hit towns. If anything, the situation is worse this morning than it was yesterday. And it's still raining ...
Posted by Jennifer Campbell-Hicks at 8:25 AM No comments:

Mother Nature has apparently forgotten that Colorado is a desert because we've gotten more than 5 inches of rain where I live in the past 24 hours. And the rain is still coming down. The creek that runs near my house, which is called Little Dry Creek, is about ten times its usual size and has just about washed out the bike path where I walk my dog. There's no gently rolling down this stream; the water is a raging, muddy torrent. The damage in Boulder, which is about a half-hour northwest of here, has made national news this morning. At least two people are dead. Roads are washed out. Homes are flooded. Some mountain communities are inaccessible.

This is one of the craziest (and most dangerous) weather events we've had along the Front Range in years. The photos are unbelievable, and I'll direct you to The Denver Post website to see some of the damage. If you live in the area, stay safe!
Posted by Jennifer Campbell-Hicks at 8:05 AM No comments:

I've been wrestling this past week with a rewrite on a hard SF story. I don't usually write hard science fiction. This one came out of the Launch Pad workshop in July. That week I wrote a flash that I later realized was less of a story in itself and more of a premise for something longer. This work-in-progress is the "something longer." The first draft is decent, but the opening pages needed help. After three false starts, I finally have a hook that is compelling and gets right to the crux of the story. Which means the rest of it will fall into place relatively easily. I hope.

I have no new submissions to report, due to having received no rejections.

I've been following the coverage this week of the Toronto film festival, and several movies have premiered there that I am salivating to see when they make it to the hometown theaters. On the top of my list is "Gravity," about two astronauts who are left drifting in space after their shuttle is destroyed. The previews look amazing, and the early reviews are overwhelmingly positive. Another movie picking up critical acclaim is "12 Years a Slave," which sounds like a tour de force of a story and also stars many of my favorite actors. Third on my list is "The Fifth Estate," partly because I've been handling newspaper coverage of Wikileaks for years now and partly because the new film stars Benedict Cumberbatch.

Also this week, in a fit of nostalgia, I've been doing a rewatch on a 1980s British television show called "Robin of Sherwood." This show started airing on Showtime when I was 8 or 9. I have the entire series on DVD, but I haven't watched it start to finish in years. I'm about halfway through the second season (each season is only six episodes), and some details have jumped out at my adult self that I never noticed as a child. Almost every episode deals with religion in some form or another. There's no sign of the cursing, blood, nudity and sex that have become the staples of premium cable shows. In fact, the romance between Robin and Marion is ridiculously chaste by today's standards. The writers depend not on gritty realism but on good stories.

Related to that, I also reread the one and only fanfic I ever wrote about "Robin of Sherwood." I'm not in the habit of rereading my old stuff, but I remembered being particularly proud of this story, which I published at fanfiction.net in 2001. In rereading it now, I winced. A lot. My writerly self from 12 years ago had a disastrous sense of pacing and an aversion to the word "said." The characters rarely  "say" anything, but they do pronounce, call out, tease, reply, plead, mutter, admonish, soothe and insist, and that's just in the first two scenes. On the good side, it's gratifying to see how far I've come as a writer since then.
Posted by Jennifer Campbell-Hicks at 1:56 PM No comments:

There is nothing about this that isn't made of awesome -- and adorableness. And the good side of delayed gratification? That's something one of my children definitely needs to learn about.

Posted by Jennifer Campbell-Hicks at 9:00 AM No comments:

Stuff and fluff, a day late

Yesterday was an exhausting day, mostly thanks to my day job. Labor Day weekend means more advertising in the newspaper, which is a mixed blessing. It's more revenue for the paper but also means a proportionally larger news hole to fill. And if that wasn't enough, I was kept more than busy thanks to Obama's statement on Syria. The upshot is, I didn't have time or energy for blogging.

Labor Day weekend in downtown Denver also means the always delightful Taste of Colorado festival (sarcasm alert!). As has become typical for me over the past few years, instead of hanging out with fellow writers at WorldCon or fellow geeks at DragonCon, I am dodging jaywalking pedestrians and red-light-running vehicles while navigating the business access lane on Broadway to get to my office. I would rather be in San Antonio or Atlanta. But I still plan to watch the live-streaming Hugo Awards ceremony tonight.

I wrote a couple of flash stories this week and submitted one. The other needs some work.

I'm reading Mary Robinette Kowal's "Without a Summer," which I'm enjoying just as much as I enjoyed the first book in the series -- that is to say, a lot. I'm also reading Ted Chiang's novella "The Truth of Fact, The Truth of Feeling" at Subterranean Press.

Overall stats for August:
Word count: Not sure, but between 6,000 and 8,000
Total submissions: 8
Posted by Jennifer Campbell-Hicks at 12:46 PM No comments: