Maybe I can make this a usual thing again.

I completed my 41st orbit of the sun yesterday and am working on orbit No. 42. When I was a kid, I thought anyone older than 40 was ancient. Now I don't feel particularly old. There's a lot of life and creativity left in this body, and a lot of cool stuff to come.

To celebrate my birthday, my family treated me to lunch and a movie. We saw "Thor: Ragnarok," which is soooo much fun. There were a couple of twists I didn't see coming. It's always a nice surprise when that happens. I would go see it again in a heartbeat.

Coming on Tuesday, big news for the anthology "3rd & Starlight," in which I have a story I wrote with Aurealis Award winner Nick T. Chan. Stay tuned!

My current reading: "The Speed of Dark." I've never read it before, and I'm wondering how I missed it because it's amazing. Elizabeth Moon writes in the viewpoint of an autistic man in the near future who must decide whether to undergo a new procedure that would make him "normal." This is the level of writing I aspire to someday.

TV watching: I recently finished the first season of Stranger Things. I'm not one for '80s nostalgia, so what prompted me to watch it? I was starting to feel like I was the only science-fiction geek who hadn't. My verdict: three out of four stars. The kids are fun, and the Upside Down is terrifying. I'll watch season 2 at some point, but other shows will come first, like Outlander and Mindhunter.

Posted by Jennifer Campbell-Hicks at 5:58 PM No comments: 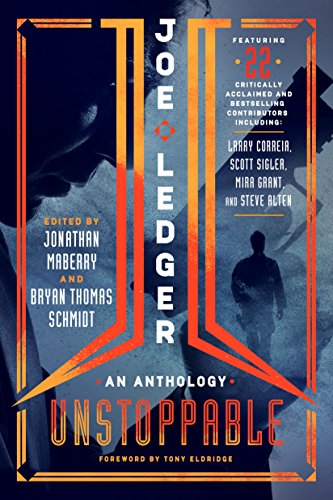 I have a story in this exciting anthology, co-edited by Jonathan Maberry and Bryan Thomas Schmidt. These are stories by other authors based on the Joe Ledger books by Jonathan Maberry. The book released on Halloween. As I write this post, according to Amazon rankings, Ray Porter's reading on Audible is #1, the Kindle version is #3, and the paperback is #14. You can make your purchase through Amazon right here.

Sometimes on this blog I will share how a story or publication came to be. So let's talk about my story "Three Times."

Bryan Thomas Schmidt had previously published one of my stories, "Malfunction," in his anthology Ray Gun Chronicles. About two years ago, he invited me to submit a story proposal for this project. Confession time: I'd never written a story proposal. This was painfully obvious when I sent over my proposal to Bryan and Jonathan, and it didn't pass muster. The less said about that, the better.

I'm not one to give up, though. Knock me down and, well ... you know how the rest of that goes.

What I am good at: Quiet stories that tug at the heartstrings. How could this fit into Joe Ledger's world? In his novels, Maberry occasionally switches for a short time to the viewpoint of an ordinary person who is affected by Joe Ledger's team and the monsters they are hunting. Most of those people end up dead. I wanted the story of one who survived and how that person dealt with the trauma of what they had been through.

I also wanted to write about a character whom I loved who disappeared from the series too soon (for me): Grace Courtland. Grace was strong and confident and capable. She was the sort of woman who could inspire others to make more of themselves and to be better.

I took those two ideas and wrote a proposal in about fifteen minutes. I didn't agonize over it or revise it. I wrote it and sent it off. Jonathan and Bryan gave me the go-ahead to write the story, so I did.

The story ended up being about more than I intended, which stories tend to do. Yes, it's about surviving trauma and using it to become stronger. It's also about: How journalists struggle to deal with the tragedies they cover. How a woman copes with sexist stereotypes when she isn't a strong and confident person. How a mother isn't always a great mom but can always do better. All this sounds gloomy, I know. But really, this story is full of hope and optimism. And zombies. I loved writing it.

So now "Three Times" and Joe Ledger: Unstoppable are out in the wild. Hooyah! I hope you enjoy every story in the collection.