A Wrinkle in Time

I finally got around to seeing "A Wrinkle in Time" today. The critical reviews and general reaction were lukewarm, so I went into the movie with low expectations and, surprise! I loved it. 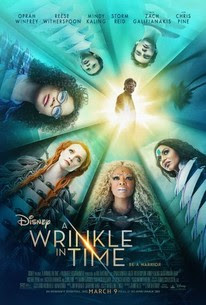 For me, the movie hits the right tone, and it mostly gets right the themes and characters. The young actress who plays Meg (Storm Reid) does an excellent job portraying her spunk, intelligence and insecurity. The three Missus are fun. The costumes, makeup and special effects are gorgeous. This is a movie that benefits from seeing it on a movie screen.

The changes from the book were minimal and didn't bother me. The Murray family is streamlined with the elimination of the twins. The centaur is instead a giant flying leaf of lettuce with a head. Aunt Beast is gone (which is fine with me because I didn't think that chapter added anything to the story and was weirdly uncomfortable, anyway).

The one scene in the book that has stuck with me since I was a kid, of a suburban street with ball-bouncing children, was brought chillingly to life on the screen.

All in all, the movie worked for me.

In my small group, there were two other reactions.

The first one, from those who hadn't read the book: They had difficulty following the plot and, "The last half-hour, I felt like I was on drugs."

The second one, from those who had read the book, was that the movie didn't capture the essence of the story and changed too many things.

It's been awhile since I've watched a movie that generated such divergent opinions.

Next week, I plan to take the kids to see "Black Panther." Our first attempt to see this one ended in disappointment when every showing was sold out. That was opening weekend, and this is more than a month later. This time, I predict success.
Posted by Jennifer Campbell-Hicks at 6:37 PM

I looooved that book!!!!!!!!!
Whot you'll find in our
blogOwamma, dear, is an
eternity of opportunities:
even larger than a googlplexianth,
because the universe is finite,
is a chance for us to RITE everthn
Upstairs which is whot Im soooooo
lookn4ward to...
God bless you.

How is it you dont decide
whether to REPLY or DELETE?
Now Im sad. Boo-hoo.